On Saturday 11th May 2019, ten members of the Band ventured over to Lupton House, Churston Ferrers, to take part in the annual Music Festival. The timing of this Festival co-incidentally clashed with the Dart Music Festival, which was in full swing as local members of the band crossed the Dart on their way to Lupton House for the appointed time for their classes at 18.00pm. Other players from the South Hams made their way to Churston Ferrers via Totnes and Paignton.

Lupton House is a magnificent Stately Home (previously run as Gramercy Hall school) set in extensive grounds. The large historic rooms of the house are very well suited to the nature of the music festival, allowing audience and adjudicators to listen to the instrumental performers and their accompanist, who perform in an excellent acoustic with a wonderful grand piano. The festival has been running for almost 70 years, and Gala Concerts are held at the Palace Avenue Theatre, Paignton, where some other classes are held each year.

The Dashing Devon Dukes were entered for four ensemble classes, in which they played and sang three medleys of songs chosen for either their matching keys or their nature, and also another traditional song, Green Grow the Rushes, Oh! which was long enough to stand in a class on its own…each Instrumental Class has a time limit which needs to be adhered to so that the programme can run smoothly, and also the adjudicators know before a performance commences how long it will last so that they can award positive and perhaps negative critisism, as well as the all important mark!

It is a sad truth that in bygone years (pre internet) these festivals were intense competitions with numerous independant schools and individuals entering their bands and choirs to take part and perhaps win the Shield, Trophy or Rose Bowl which would have been presented at the end of a magnificent Gala Concert to mark the end of the Festival.

The Dashing Devon Dukes performed their Songs in front of perhaps 30 people, and a pair of adjudicators. As they were well tuned and rehearsed, playing songs that they enjoyed, it was clear that they stood in a class of their own. The older more confident players were able to hold the vocal lines and encourage the younger players to make their contribution to the sound by strumming their chords together, and the adjudicators awarded them Distinctions in all four Classes for which they entered, which meant that they could take the Shields and Trophies away, until next year when they will be returned, suitably engraved, ready for the next  Festival. 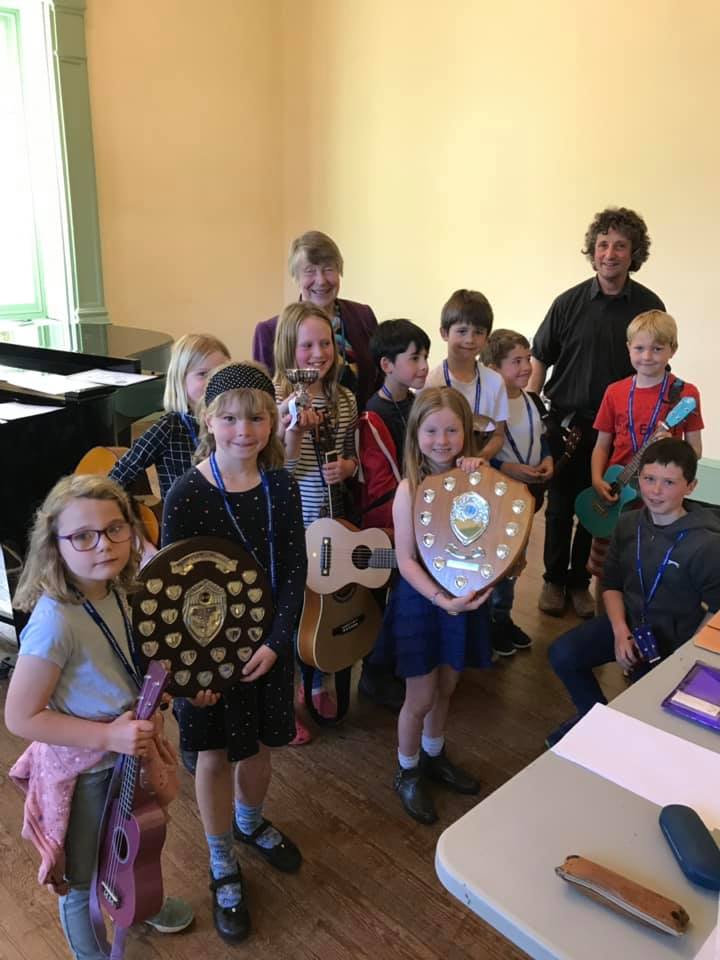